Poetics of (Mis)understanding: Culture-Making Potential of Interference in Artistic Communication

On behalf of the Historical Poetics Department of the Institute of Literary Research of the Polish Academy of Sciences and the Board of the Foundation "Center for International Polish Studies," we would like to invite you to participate in an international interdisciplinary conference "Poetics of (Mis)understanding: Culture-Making Potential of Interference in Artistic Communication." The conference will take place on December 7-8, 2017 at the Institute of Literary Research (ul. Nowy Świat 72, Pałac Staszica) in Warsaw, Poland.

We are interested primarily in exploring the positive aspects of misunderstandings in communication – unlike the approaches that have traditionally emphasized the destabilizing and destructive impact of such interferences. Together with you, we would like to show the mistakes and misunderstandings in communication as an undervalued source of innovation in culture. We treat misunderstanding and various semantic shifts as mechanisms of intercultural contact that are permanent, inherent, and impossible to eliminate; they are inscribed in the broadly defined translation process.

We want to reflect upon communication that is para-, between-, and beyond language; that is (inter)cultural, literary and artistic. We would be particularly interested in approaches within the areas of literary criticism, anthropology, cultural and translation studies. We treat all philosophical, sociological, communication, and cognitive perspectives as a context for issues in the fields of literature, culture, and translation.

If you are interested in applying for the PASIFIC Postdoctoral Fellowship, do not miss the live Webinar for Call 2 Applicants! It will take place on 28 October 2021 (Thursday) from 10:00 AM to 12:00 PM (CEST). During the event, we will introduce you to the details regarding the application process, what steps you should undertake before preparing your proposal, as well as guide you through the registration procedure in the SEA system. We will also show you what are the necessary documents you should enclose in your application.

AGENDA
In order to enroll in the event, you need to fill in the registration form.

20-22 October 2021: INTERNATIONAL CONFERENCE "THE SUN AND HER PLANETS. AROUND GEORGE SAND’S RECEPTION IN CENTRAL AND EASTERN EUROPE"

In Poland and Central and Eastern Europe, critics and historians have rarely addressed the question of a serious impact of George Sand on the literatures of these regions, nor have they bothered to list possible references to her works. This is surprising, given that she was an author whose work, as it is well known, was explicitly present in different spheres of readership for a few decades at least, and it seems therefore impossible that she should have had no influence at all on the ideosphere, as well as on the aesthetic and cultural models of these places.
This conference intends to fill this gap, and in this sense, it is a first one in Poland. It would like to pay tribute to George Sand in two ways: on one hand, it aims to highlight her role as a producer of culture, and thus examine the phenomenon of “sandism" and its dissemination in Poland and in Central and Eastern Europe; on the other hand, the conference aims to examine as systematically as possible the way in which the works of the French writer have been received, read and understood in these regions. This approach acknowledges the intense development of Sand reception studies in other countries.

The goal of the conference is to create space for discussing the impact, benefits and challenges of discovery services for the social sciences and humanities (SSH) in the European research ecosystem.

We would like to bring together members of the Open Science and SSH communities (researchers, university and library staff) as well as other TRIPLE stakeholders such as publishers, science journalists, SMEs, public authorities and policy makers.

Topics include the nascent GoTriple platform – the innovative multilingual and multicultural discovery solution for the SSH –, crowdfunding in science, business models for Open Science and the role of SSH in the European Open Science Cloud (EOSC).

Link to the programme: https://project.gotriple.eu/triple-international-conference-2021/

Link to the registration: https://us02web.zoom.us/meeting/register/tZIkdOmgqDwoEtUST8PTisW_aBmqpmjGipiL

The second call for the PASIFIC Postdoctoral Fellowships Programme is now open!

Call-2 for the PASIFIC Postdoctoral Fellowships Programme was opened on 15 September 2021. The PASIFIC Programme is coordinated by the Polish Academy of Sciences and co-financed by the European Union under the MSCA COFUND scheme (Horizon 2020). In the second call, 15 researchers of any nationality and representing all research disciplines will be offered a possibility to pursue their research for two years at one of the Polish Academy of Sciences institutes and the International Institute of Molecular and Cell Biology. The deadline for applications is 30 December 2021.

PASIFIC fellows will be offered a monthly allowance of approx. €2,500 net. Those, who decide to come to Poland together with their families, will be entitled to an additional family allowance. In addition, they will be granted a research budget of up to €60,000 for direct costs related to the project implementation.

To apply for the PASIFIC fellowships, candidates must be in possession of at least a doctoral degree or have 4 years of full-time equivalent research experience. Also, they must comply with the MSCA Mobility Rule and have not carried out their main activities in Poland for more than 12 months during the three years prior to the call’s deadline (31 December 2018 – 30 December 2021).

Please find more information about the application procedures as well as templates of the necessary documents on website PASIFIC: https://pasific.pan.pl/call-2/. 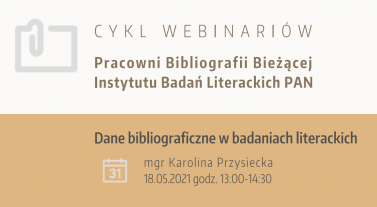 In this coming spring, researchers of the Institute - established scholars, authors, and literary experts will delve into thought-provoking works by some of the most influential and internationally recognized Polish writers.

Please check out the series' upcoming events, save the date, and join us live on Zoom for informative lectures which provide you with insights into important messages conveyed by the authors!

Does Henryk Sienkiewicz, a man from the age of steam, have his place in the digital age culture? Is this writer, Nobel prize winner, whose novels were once absolute bestsellers still interesting for scholars and the audience at the beginning of the 21st century? Or could he potentially be?

The lecture will try to answer these questions, showing some digital scholarly stories told about Henryk Sienkiewicz's life, work, and reception (for example, his journeys to America and Africa or monuments for Sienkiewicz erected over the years). It will also analyze traces of Sienkiewicz's presence in contemporary culture - including novels, films, and video games.

Bartłomiej Szleszyński - professor at the Institute of Literary Research, Polish Academy of Sciences, head of the New Panorama of Polish Literature team, responsible for creating and operating NPLP.PL, a platform publishing digital scholarly collections, and TEI.NPLP.PL, a platform for scholarly digital editions, deputy director of the Digital Humanities Centre.

On May 26, Prof. Katarzyna Czeczot will argue that the language of Dorota Masłowska's Snow White and Russian Red (Wojna polsko-ruska pod flagą biało-czerwoną) has been shaped by the history of Poland as a Russian province in the 19th century and as a satellite country of the Soviet Union. The talk will explore the cultural game of inferiority and superiority, seen as inseparable from empire and province’s geography.

The second edition of Dorota Masłowska's debut novel Snow White and Russian Red (Wojna polsko-ruska pod flagą biało-czerwoną) comes up with the cover of Maciej Sieńczyk, cartoonist, illustrator, comic book creator. His drawing transforms two images crucial for Polish visual culture. The first one would be a nineteenth-century allegory of Poland as a woman trampled by a horse on which a Cossack with a saber sits. The second one depicts a Polish nurse providing care for an insurgent, probably during the Warsaw Uprising (1944). Both scenes outlined by Sieńczyk, referring to Polish martyrdom iconography, reveal the paradoxes of relations between Poland and Russia, relations to which the title of Masłowska's novel also refers. Snow White and Russian Red's language is the product of a post-dependent imagination, shaped by the history of Poland as a Russian province in the 19th century and as a satellite country of the USSR in the 20th century. The author of this novel excellently manages to recreate the cultural game of inferiority and superiority, inseparable from empire and provinces' geography.

“I got imprisoned for rock and roll": Andrzej Stasiuk and the Literature of Periphery – A lecture by Dr. Krzysztof Gajewski / / in cooperation the Kosciuszko Foundation and the Institute of Literary Research of the Polish Academy of Sciences

The text comes from: Kosciuszko Foundation - American Center of Polish culture - “I got imprisoned for rock and roll": Andrzej Stasiuk and the Literature of Periphery – A lecture by Dr. Krzysztof Gajewski (thekf.org), https://www.thekf.org/kf/events/KF_Online_Programs/i-got-imprisoned-for-rock-and-r/.

The literature of periphery tells stories about places, persons, and things that do not belong to the mainstream of history, culture, or politics. The term was coined ad hoc to refer to Andrzej Stasiuk's literary fiction, but it can also be applied to other writers from the history of Polish literature, such as, for instance, Bruno Schulz, Stanisław Vincenz, Marek Nowakowski, Sokrat Janowicz, or, Stasiuk's literary master, Zygmunt Haupt. The magnificent examples from the US literary history can be evoked too, such as John Steinbeck or William Faulkner. In traditional literary theory, one can find the term "regionalism," and to some extent, it is close to the notion of the periphery. The latter contains an internal and strong connection to the broadly understood processes of colonization the former is deprived of.